Apps that Irk Me and one that suprisingly doesn't

I am trying to break the mindset I have that applications need to be hosted locally in order for them to be valuable or useful. I am used to having the DB server be on a system I can administer or a webserver that I can tweak by updating a config file using vi. So I am highly skeptical that an online application can provide me all the necessary functionality needed to complete my tasks.

I apply that same 'locally hosted' mentality to office suites (although, I don't really know why). I just want to have them local so I at least the ability to change or fix one of the upteen hundred silly things that seem to happen with Microsoft applications (one example being the stupid disappearing menus in Excel 2007). Which brings up the question of whether we have reached the pinnacle of usability with Excel (which I will save for later in this post).

So I am off to try and create documents using Google Docs (http://docs.google.com).

So far, I have been able to copy in a list of performance metrics taken from a clients system and create a graph. Hmm. That is a pretty big step for an online application. Even more impressive is I did not have to hunt for menu or icon needed to create the graph. Its right there on the front screen (see micro screen shot below).

That's cool. I don't have to hunt for something. That probably saved me at least 45 seconds and quite a bit of invective energy.

What impressed me even more was I created the graph based on three columns of information and did not have to identify which column contained the labels and which contained the data. 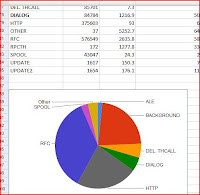 That's amazing! This application created a graph without my having to go back and poke around through the selection parameters. I'm stunned I tell you. In all the years of using Excel I can't remember a time where creating a graph did not at least require going back and making adjustments to the data.

So, back to the question about whether we have reached the pinnacle of usability with applications like Excel. I have to believe that at some level there is nothing further that can be added to this spreadsheet, in this current format, to make make it more efficient as a tool for creating reports. All the gizmos and extra doodads in Excel 2007 make it less usable and more annoying. Do we really need to have hiding menus? No.

So, if using local apps means having to live through the silliness of ever expanding application gizmo wizardry, then maybe there is something to this hosted application thing after all.